So, we had this major storm the other day. Really dramatic and beautiful -- from the warmth of being indoors, that is. I would not have wanted to be stuck outside in that for long. I went out for a quick soak in the beginning -- it had been really hot before -- but I came back in as soon as I started to see hailstones. The neighborhood kids had a field day though, running out as soon as the rain started to subside to pick up all the fallen fruit. Pranto, my neighbour's son, was disappointed because all the older kids beat him to the ripe fruit, while he got stuck with the sour green mangoes! The rain started up again in a few hours, though, and went on all night. I had frogs swimming by my windows!

The day after, I opened up all my doors and windows and found this outside my step: 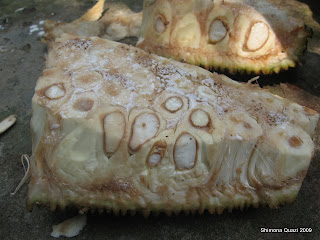 Well, not really. Actually it was this enormous whole jackfruit brought down by the wind. Gremlins ate my photos -- I just cannot find them -- but the way it was sitting, all cute and innocent, it looked just as if someone had put it there. So I left it for a little while, asked around, realized nobody had been picking jackfruit by my cottage that day, and as soon as I realized it was literally a windfall, I swooped in to claim it.
I'll post the jackfruit saga later, but we also had a ton of fallen mangoes to deal with, and the air was so fresh and light after the storm. So I sat outside with my neighbours and saw what they've been up to lately: 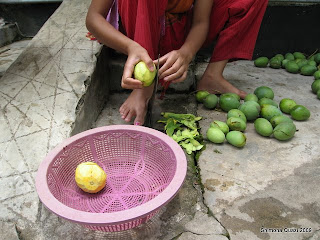 Peeling windfall mangoes with a boti -- a curved blade used in Bangladesh -- I know they use something similar somewhere in Polynesia, but I think it's an import there. Is this just a south asian thing?
Dried shredded green mango 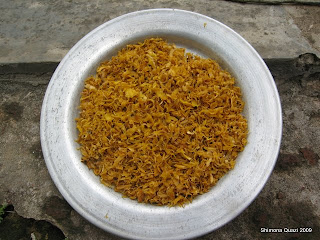 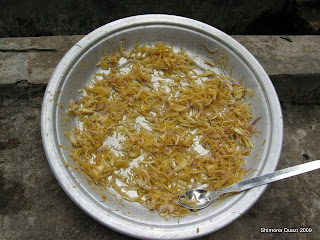 Shredded onions, to be dried, mixed with the dried mango, bottled with plenty of mustard oil and stored in the sun. Makes a pungent pickle!
Homemade mango leather!! Even better than my grandma's 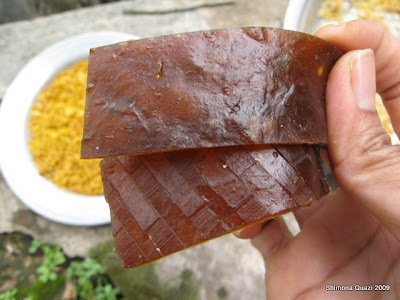 ... and prettier! The patterning is from the woven basket the fruit leather is dried on.
I decided to pitch in and make a mango salad. Adapted from something my friend D's mother makes round this time of year. Heaven on a plate.

Half-ripe mango: you want you want it tart and only a little sweet, neither hard and green, nor fully ripened. 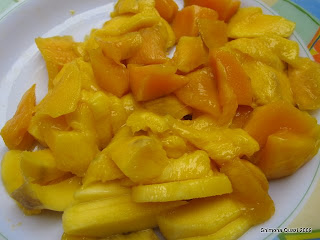 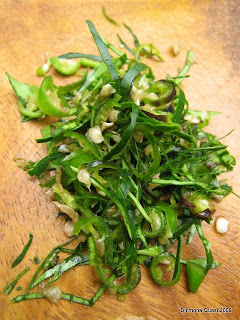 Shredded chillies and lime leaf -- and no, I
did not use the boti for this. I'm too chicken
to use one! 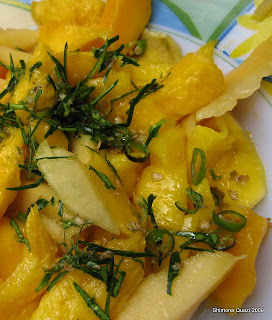 add a little salt, a bit of sugar,
and just a tablespoon of milk 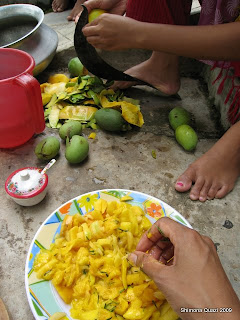 mix em up with clean hands,
mushing the mango a little. 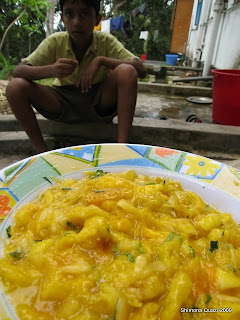 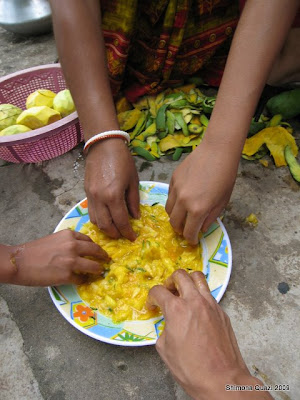 wash your hands, gather round, dig in!
Prepared by Treehugger
Email ThisBlogThis!Share to TwitterShare to FacebookShare to Pinterest