That magnificent cake in Bon Appetit's cover stared at me as I was getting ready to pay my groceries. My heart sank. This was a challenge I could not resist. It took me a while to find strong justification to bake that cake: a dear friend is leaving for a five-month out-of-the-country adventure, my husband's dear friend recently got married and I wanted to introduce her to my circle, and we haven't had tea party for a while (which I have promised ES since last year's World Cup!). So, I began the three-day adventure in making this cake: 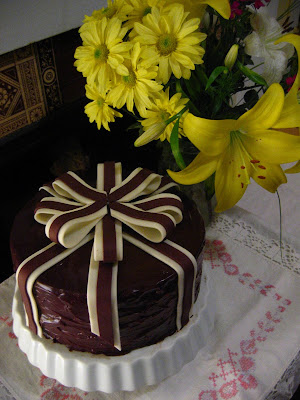 I baked the cake on Wednesday evening, made the buttercream and spread it on the cake Thursday evening, and did the ganache glace and ribbon on Friday several hours before the tea party. I've learned from my opera cake adventure that it is wise to spread the gargantuan task over several days to keep one's sanity and to prevent making rushed decision that may ruin the cake when fatigue descents.

The cake was the highlight for the tea party, but other things that we made were also turned out really good. A friend bought a bowl of salad with intriguing mixed of texture (crunchy, velvety, crackling). A and I made a sandwich from whatever we have in the fridge (Lebne, cranberry chutney C's friend gave her as a Fall-season gift and which she shared with a number of us, shaved parmesan and thinly-sliced cucumber), and a last-minute orange-cardamom scones from Mark Bittman's "How to Cook Everything" book (375F is a better temp than his recommended 450F). L brought creme fraiche and mascarpone for the scone (BBowl no longer stock Devonshire Cream. BAD DECISION, BBOWL!! :), E brought raspberry jam to go with it. We had Twining Earl Grey and Lady Grey that C's husband brought as a gift from his recent trip to the UK (US version is too weak to my taste.... And I am not going to be apologetic about my Earl Grey snob... ;)), and for the last round of tea, we had Orange Rooiboos from Simon Levelt in Leiden. 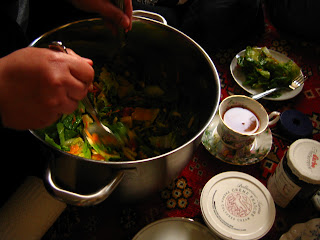 The tea spread out: 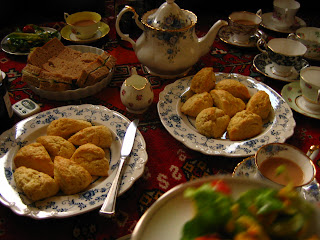 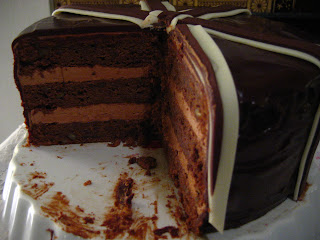 Additional notes for the cake making:
1. For the cake, I used only 1.3 cups of sugar instead of 2 suggested.
2. I did not use Bon Appetit's glaze recipe. Instead I used suggested ganache recipe and step-by-step process from Joepastry's blog: 12oz chocolate chip, 12 oz of cream, 2 TB honey, 3/4 ts instant coffee (per BA's ingredients)
3. I followed the step-by-step chocolate tempering from About.com, and then continue with Joepastry's procedure (it calls for "room-temperature tempered chocolate").
4. I also follow Joepastry's procedure for making buttercream: sugar and corn syrup needs to boil to 250F (instead of BA's less exact 1 minute boil).
5. For the ribbon, BA's direction is pretty clear. I was able to do everything with rolling pin and a help of a plastic ruler :): 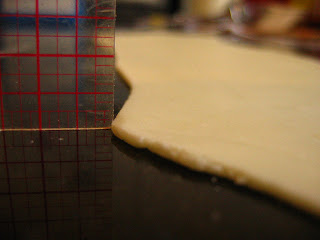 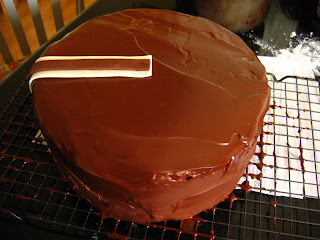 6. If I ever have a Kitchenaid Stand Up mixer (the current one is loaned by dear B), I will get a second bowl to ease switching between batter.
7. I find out that I like spongy layered cake better than dense cake like this torte. My favorite so far is still Opera Cake with joconda/gioconda as its base. My next adventure will probably revolves around joconda-base or genoise-base cake. What with the loaned Kitchenaid, I don't need to train my biceps muscle using my old (but surprisingly reliable) hamilton beach hand mixer to beat the egg whites. Heh heh.. :).

It was a marvelous adventure. I am grateful for friends who were there for the party. The hikma (wisdom) for this occasion: One need a regular heartwarming tea party to recharge in order to face the bittersweet world out there. 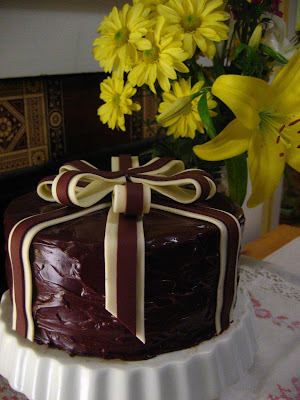 Prepared by cookingcucumber
Email ThisBlogThis!Share to TwitterShare to FacebookShare to Pinterest